The Clubs origins go back to the 60’s when a nucleus of local Clifton lads and friends, purely for the sheer enjoyment of the game, which is still reflected in the ‘Rockets’ philosophy, played regularly on Clifton Downs by the Suspension Bridge.

Rockets have a loyal base of club members, and still keep in touch with previous members, including previous Secretary Bob Sheppard, who still watches occasionally, Vince Gaetani, one of the most successful Managers for the Club.

Dave Perryman President, has been with the Club, from its second year of formation, Geoff Gardner Vice Chairman and Secretary, played with the lads of the 60’s, but joined the Club in later years, and up to 2003 had been Secretary for 15 years. 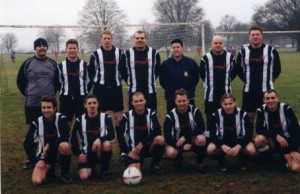 Other long standing Club members are John DeIuliis, part of the Italian connection, after over 10 years as Manager, passed over the job to Andy Davey from the 2003/2004 Season, and from May 2006 Joel Hannan has taken over the responsibility along with John Saddler for the Reserves. Jamie Hill who was a regular goal scorer, holding the previous goal scoring record of 41 in a season, until beaten by Ben Lawrie with 44. Simon Bennett now Chairman who still manages some ‘First Team’ appearances. Finally Pete Denner who is always there, the Clubman who will always stand down to let someone else play.

A new group of Players from the Bedminster area, hopefully will move the Club forward, and still keep its traditional sporting reputation and social aspect. Andrew Farr has made a great contribution to the “New Rockets”, and the Club enjoys an exceptional social atmosphere with a strong base from the Bedminster Area.

John Price who has been a loyal supporter from the early days of the Rockets is a Life Member.